There was a wall of clouds on the horizon at daybreak. The dead poets had gathered all night around the simmering pot of concepts, debating over what could have plucked the humming strings in the silence of the night. Their minds were flying high above the glittery surface of the Earth, playing catch with fading echoes of all the chirping, croaking, booming, rattling, whirring sounds of Nature, forming a choir down below. Blended Forms - Consciousness and the Universe

There was a buzzing sound in their ears of voices from beyond the grave. Bertrand Russell whispered that strings of events are connected according to the laws of motion. One such string is called one piece of matter; another is called a person, and the transition from one event in the string to the next is called “a motion,” like a motion picture of multiple flows into one flow, strings of the Universe.

Johannes Kepler joined in the philosophical ramble. By string, he meant the length of any motion or any other length capable of emitting a sound. He clearly associated distance to sound. A string is a distance traveled by any motion, even that of a gravitational wave or a radio emission. On the one hand, there is distance, mass, and electric force. On the other, there is entropy, beauty, and melody. Beauty refers to the visual; melody refers to the sequence of sounds. Where, then, does gravity fall? Since gravity isn’t an entropic force, it seems fitting to place it along distance, mass, and electric force. The Conservation of Ontology - Consciousness and the Universe

Cosmic Dawn by Harley Katz/University of Oxford Our planet is still ploughing through the debris of ancient supernovae, and I can't help but wonder whether a muon shower might have enhanced our ... 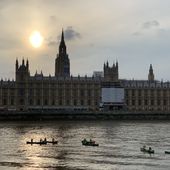 It may be that a throw of dice will never abolish chance, but as soon as the infinite gam e is on, each time the dice are tossed, it gives a nudge, a direction, builds things to a higher ...

The fool on the hill who tagged along recounted the story of her profound experience with light, sound, and water, prompting the symposium to shout to Joseph Mallord William Turner whether he could add sounds to his paintings of the Unveiled from beyond the grave. In a conceptual reality where distances are humming strings,  there exists a table of correspondences between colors of light, wavelength, and related sound frequencies.

In the first light of the Sun, they composed poetry using metaphors like meteors of the sea, birds of the cosmos, and flowers of the sky. They formed rhymes about the Earth being a soundscape of ringing rocks responding to echoes of singing stars and balancing planets. They swore there is a connection between light-givers — optical transients with fleeting lights — and light-bearers — anglerfishes whose lure inhabits a bacteria called photobacterium. Oumuamua - Consciousness and the Universe

Portland, Maine What is left of time passing? Ruins of castles, scrambled places in my head, old photos of stairways I climbed to the top of a mountain cutting through the thick haze. Seated on a ...

Wishing to co-create a poetic code for the house of everything, they disappeared over the horizon, chasing communication keys and following trails of vanishing stars falling off an invisible tree like autumn leaves. Humming strings waved, making faces in the clouds.  Light beings came along, playing peekaboo by the silvery light of the Moon which hung below Jupiter. The Earth, deafened by the sound of temperature rising, cast her shadow over the Moon. On my way to New York City, trees swung fall leaves, bowing down to the rapid translation of commuters. Gravity pinned down the heavy stream while dead leaves freely rose, blown by the wind. Dancing branches sang to the tune of the trumpet and the harp whose strings were strained beyond limit by the lyrical Lady so that they snapped free. The gradual collection of strings of events resembles a gathering of kindred spirits. Beyond human perception, a string in harmony with another will always vibrate sympathetically. At the tropical garden of Valombreuse, red-tailed hawks hovering over bare trees and white-tailed deers on the side of the highway are replaced by hummingbirds hopping on porcelain roses. In the lost paradise surrounded by water, ego is a skin-shedding reptile crushed by the passing of time, a frog-poet grappling with illusionary rhymes. As I listened to the sound of the ocean waves crashing on the long sandy beach, the cacophony of the falling waters came back into my mind. Does this then mean that my observations become real when I observe an observer observing something as it happens? Thoroughwort What sets apart the yogi from the rest of us is a sustained frequency Where reality lies - Consciousness and the Universe

I woke up from a deep slumber to Thoreau's words to front only the essential facts of life and see if I could not learn what it had to teach, and not when I came to die, discover that I had not ...

Since sounds travel slower than light, beauty and melody are split. They are a two-step experience. What we sense through sight and hearing occurs unevenly as a result of the infinite number of strings that separate us from every droplet bouncing on the ground in a single extended event. At the rate at which waves roll down the beach, a compound sound emits a number of harmonically related vibrations. As sound travels through air, water, and matter, it causes vibrations along a greater number of dimensions than the linear form of a single string. Wave frequencies superimpose on each other.

Transformed sounds and waves travel across spacetime and through matter.  Steadiness implies that even gravitational waves are part of a conversion chain. In the Universe occurs the limitless transmission of multiform waves. For them to travel, they require a source (host), space in-between, and a receptor. While sounds can’t move through empty space, gravitational ripples travel at the speed of light and distort the fabric of spacetime. Humming strings connect points of the spacetime manifold. CrossOver - Consciousness and the Universe

Like a cast listed in the order of appearance, we wonder whether time or space comes first. Or do the two main actors appear in tandem in the first scene? An ancient philosophical debate mirrors the

If being came out of something, that something which came out of the shadows has a sound for property. Is a sound incidental or fundamental? Humming strings whose shape and size bring about the lowest frequency grow to become moving sounds and waves of the ensouled Universe. Strings cross each other and vibrate like a string orchestra performing a movement. The Universe, in its plurality, is a resonance chamber, a music studio. Resonance in and out of matter carries waves of a discreet melody played on the keyboard of time. Prologue to all the possibles - Consciousness and the Universe

Russell and Kepler seem miles apart. Can a length be anything else but a motion across spacetime? How can the transition from one event in the string to the next be a motion, and the length of any motion be a string? And how can a motion not make noise or give an impulse that causes a vibration? Those questions feed into the debate on how we perceive the Universe, whether we view it as a patchwork of events or an ever-changing geometrical figure.

A string carries the meaning of all orders of events. That which plucks the humming strings in the silence of the night relates to the ontology of a string that carries the unspoken intent of a linkage. From the sounds of moving objects, we feel that stars, galaxies, and other bodies might also produce noise friction through the intergalactic and interstellar medium. Stars rustling radiate radio waves covering the muffled sound of Nothingness whose grip loosens to let strings break free. Strings become random motion, seesawing events separated by segments of silence.

Is light withdrawing or darkness covering the light with its cloak? Do sentient beings and inanimate objects reflect light, or do they have an intrinsic light within them whose brightness varies according to spatial and temporal circumstances? Brightness or reflection? We speak of relativity in luminous intensity and observe the brilliance of each inanimate object and sensitive being according to the luminous intensity of each other. Nothingness within bears the intrinsic light.

The Universe communicates with waves going back and forth along strings in time-like intervals. Sounds are what we hear. Vibrations are what we feel. The representational content of a human experience feeds on a steady flow of energy, which manifests light-years away into cosmic scenes of random beats, X-ray flares, and radio bursts. We’re told that bright radio bursts release as much energy as the Sun does in days or even years. They are ephemeral-like events, usually lasting for about one-thousandth of a second. However, a three-second radio burst was reported to have at least nine overlapping components. Somehow my mind made the connection with birds’ songs. There are high-pitched calls of long duration, like the gentle and clear whistle of white-throated sparrows, and repeated series of notes, such as the distress call of Carolina Wrens. Serendipity - Consciousness and the Universe

I wandered lonely as a cloud That floats on high o'er vales and hills, When all at once I saw a crowd, A host, of golden daffodils; Beside the lake, beneath the trees, Fluttering and dancing in the

Red and orange sunset extended over the clouds. Under the starry dome, I flew back home from New York City. There were pockets of lights along the Eastern Seaboard, which looked like snaps of fireworks. In the native garden, birds chirping came in and out of bushes as if they wanted to say hello. Bikes’ wheels squeaked as they rolled over red and yellow coating left by trees on the Custis trail a while ago. Time goes on.

Jamie James, The Music of the Spheres