I woke up from a deep slumber to Thoreau’s words to front only the essential facts of life and see if I could not learn what it had to teach, and not when I came to die, discover that I had not lived. If reality is the process of time and evolution, why did my journey to Zambia and the African savanna feel more real to me? We’re told that it is all a matter of perspective, that even the sight of a rainbow is an individually experienced optical phenomenon. There is no single designated lookout point from where to watch reality unfold. A 300-mile drive from Lusaka, the transboundary Mosi-oa-Tunya Falls (Victoria Falls) more than a mile-long slide down the vertical walls of basalt rock in a free fall. Like a curtain of falling water, the Zambezi River drops abruptly under the force of gravity from a towering height. The resounding waters rush down as if, the legend says, it were the spirit of Nyami Nyami, still angry at how the population was resettled and its stream was forcibly regulated by the construction upstream in 1950 of the Kariba Dam. The planned binational hydroelectric project (BHES) downstream — led by Power Construction Corporation of China and General Electric — may repeat history with its foreseeable impact on the environment and the livelihoods of the local population in the face of climate change. From an image taken on board the International Space Station showing the deep fissures on the surface of the Earth, the Zambezi River plunges straight down within the spatiotemporal boundary of a fault line from which the misty vapor spills over like white scum. Is a fraction zone the same as a fault line? Do the turbulences the plane experienced over the Charlie Gibbs fracture resemble the tremors I felt on the opposite side of the Falls?

The tightly packed water molecules fight their way down the stream. Thereafter,  the riverbed divides into a stretch of steep-sided gorges zigzagging. The column of vapor rising and the roaring Falls contrast with the seemingly smooth and tranquil river which swells before the Falls into a plateau of islands from where hippos bellow when — I could just imagine — a crocodile swims by. Along the bank extends upstream a National Park much smaller than the one in South Luangwa. It manages however to keep out of harm’s way ten white rhinoceros. 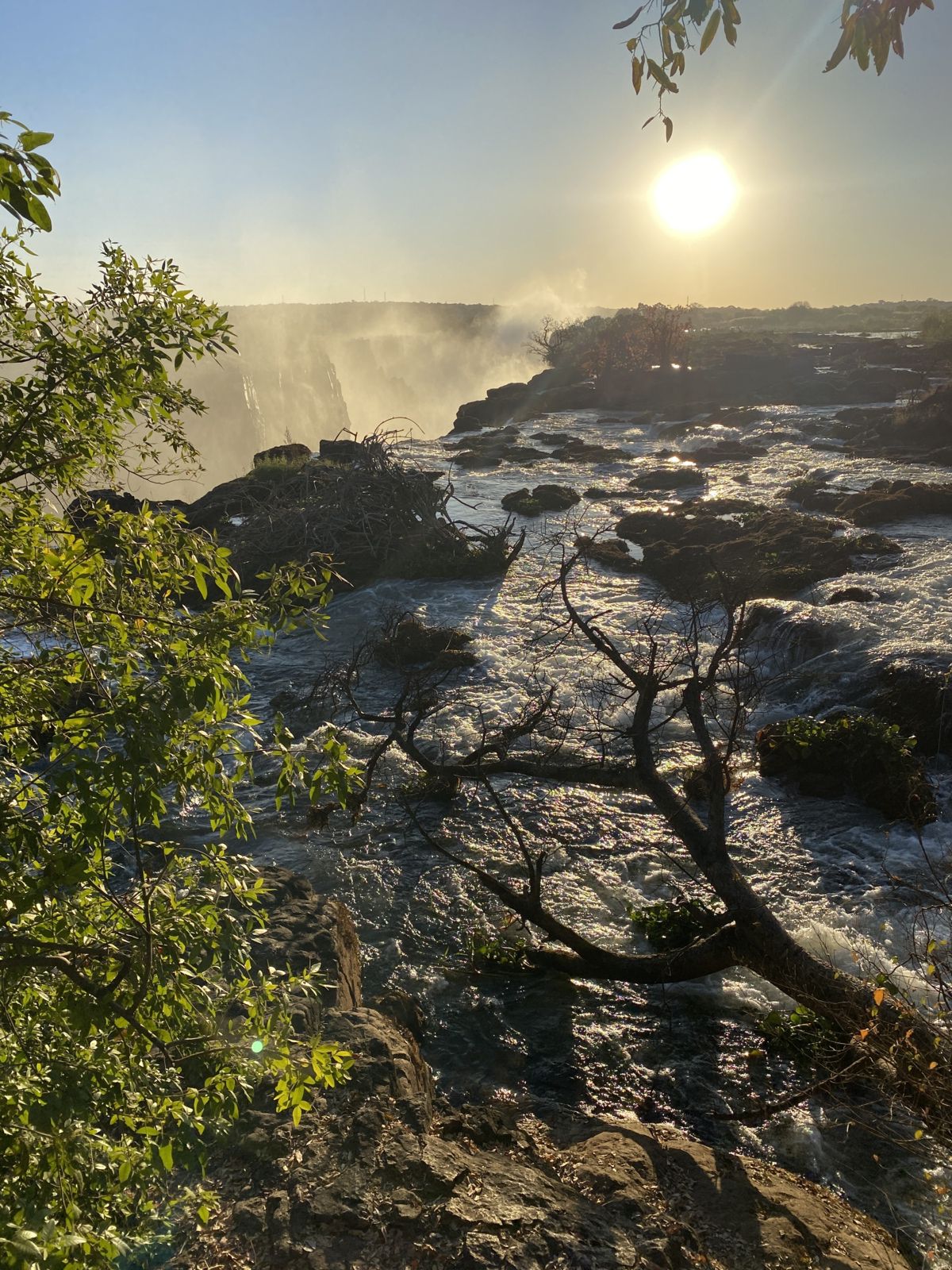 Across from the Falls, a pedestrian overpass dominates a riverine strip which one crosses to reach the very last piece of land on the Zambian side. I felt dizzy when I walked across the bridge 350 feet above the ground. As far as my eyes could see, the horizon was blocked by the misty cloud. I could not distinguish the other end of the fault line three-quarter mile away. Where reality lies is the Place of the Rainbow, an ancient name cited by David Livingstone for the Mosi-oa-Tunya Falls. The Sun came down on my left while I faced the end of the rainbow. The multicolored arc circled at my feet while the other end stretched away from the Sun on the Zambian side. At one point, there was a double rainbow, barely perceptible. Do rainbows arise and circle on both edges of the curtain? Hoping to find order in what we observe, I wonder whether our perspective is the same or whether it freely varies. Could I have seen a rainbow touching the Earth at my feet had I crossed the border with Zimbabwe and reached the right bank of the vanishing river? And if observers stand every 20 inches from each other on the opposite side of the Falls, with their back turned to the Sun, will they all see light striking water droplets and the refraction of three-dimensional air bubbles repeatedly breaking and forming in the same way I did? I wonder whether, through complex processes, exquisitely orchestrated dancing waters unfold or whether we can assume their randomness. Depending on how the sculpted ground shifts and the light falls, you may suddenly spot some form or detail half a mile away, which may or may not look like a destination.

The configuration of the fault line encloses a system of event occurrences causally dependent on each other. Within those topological boundary conditions — bathed in the evening light and battled by macroscopic quantities of water — rainbows are a window to the microscopic collision of droplets. They illustrate how a many-body system works. The smoke-sounding, rainbow-making waterfalls appear in local equilibrium, doing what they are supposed to do, what is expected from them on that ordinary evening of the dry season.

There’s a fabulous story
Full of splendor and glory,
That Arabian legends transcends;
Of the wealth without measure,
The coffers of treasure,
At the place where the rainbow ends.

Oh, many have sought it,
And all would have bought it,
With the blood we so recklessly spend;
But none has uncovered,
The gold, nor discovered
The spot at the rainbow’s end.

They have sought it in battle,
And e’en where the rattle
Of dice with man’s blasphemy blends;
But howe’er persuasive,
It still proves evasive,
This place where the rainbow ends.

I own for my pleasure,
I yearn not for treasure,
Though gold has a power it lends;
And I have a notion,
To find without motion,
The place where the rainbow ends...

The Place Where The Rainbow Ends, Paul Laurence Dunbar The fluctuations of the waterfalls reflect the translation and rotation of masses of water continuously occurring. It may be the immeasurable number of water molecules moving all at once, locally and globally, which convey an image of symmetries in motion. Their distribution in staggered superpositions abides by the geometry of steep walls and narrow channels. Versatile droplets burst, spray, roll. They go in and out of existence, from a state of nothingness to a state of being. What is their degree of freedom?

As they fall off the elevated ground with gravity, are they following a non-deterministic path? The linear fault line,  as if it were a spatiotemporal chasm, acts as a control line for the flow of water, each droplet on a short-lived time path falling prey to gravity. As time went by, a choreography of water-made wormholes, vortex, and spirals rising and wriggling popped into my head.

When I told you, meeting you somewhere close
to the heat and youth of the road,
liking my loyalty, liking belief,
you smiled and you thanked me but very little believed me.

To The Diaspora, Gwendolyn Brooks

Shortly after my return to Lusaka, I went on a quest through malls and markets for Nyami Nyami, hidden away at the bottom of a basket or the back of a display. It brought me to the Aylmer May Cemetery — an old graveyard from colonial times — next to which stand today the offices of two of the major foreign-owned mining companies.

Truth be told, I see the human world through the prism of history. Along the roads, the centenary trees wailed, chained to the ground. The next day, in a matter of seconds, the wind blew, and the clouds gathered without a drop of rain.

“The thing that I think Western people need to genuinely try to absorb and realize is that colonialism is history in the West,” said Sipho Hlongwane, a writer based in Johannesburg. “It is a thing of the past, in the West. But in our countries, colonialism is now.” The ideals of the Enlightenment are the basis of our democracies and universities in the 21st century: belief in reason, science, skepticism, secularism, and equality. In fact, no other era compares

While the hope is to discover a true mirror of nature that exhibits the essence of reality, I have lost my footing through the mirroring surface of the Earth. After a two-leg flight and a 19-hour layover, I went home the same way I came. There are so many ways to describe where reality lies that they all contradict each other. If reality is what we think we know, it is also what we think we observe. There is undoubtedly a part of unknown in reality. Reality is singular. Reality is discrete. The edge of knowing - Consciousness and the Universe

I’ve lost my sense of continuity between the places I’ve been. Amid fragmented realities, my living essence seeps increasingly through the temporal, physical, and conceptual gaps which pull apart the reality that constitutes our human existence. Each place is an element of reality I can’t quite reassemble within my mind and body.

Reality is anchored in our consciousness only through the increase of the length of time. Without physical and mental entanglement, we may be less aware of the reality of our surroundings. I feel as though I have unknowingly stumbled across the essence of reality: it is the misty cloud at the Falls that turns into fog over the Fall line on the trail to Rosslyn. It is the setting sun at the Falls that rises through the fog this morning. It is the wet drops of the Falls that become rain lightly falling on my skin. It is the rainbow I saw through the prism of history.