Some flowers shy away from light, hidden at the ground level under the thick leaves of the mayapples. Others at the tip of the stems compete in their rush to rise above all. The mind, on its toes, steps into every breach. It crawls through every tunneling hole and sneaks in through every gap, hoping for a fateful encounter with nothingness. The Universe, as I see it,  has revealed itself by expressing itself. “How did the Universe come into being?” At the core, it is ultimately and simply conceptual in nature. There is ‘order’ in the way self-feeding bits of information have built growing connections within the one general conceptual framework. The further the human mind attempts to cut through the thick fog of concepts and look at relations between all objects, the more intuition and visualization sharpen. The Universe’s generated form is a structural reality that follows visible and invisible lines, like the rotational symmetry of a plane around a point. David Hockney, The Arrival of Spring in Woldgate, East Yorkshire in 2011 (twenty eleven)

Taming infinity brings up the image of a long walk along a winding road around puddles that stretches away from the observer’s eye to disappear over the horizon. It creates in one’s mind the picture of a river that begins upstream, flows in meanders, through lakes, and down waterfalls to irrigate the Earth. How can an infinite line, a road carved out of thin air, proceed from past to future? If time is something added to space, it is an infinite loop space. From particles to astronomical objects, wherever we go, there is circularity and roundness. Although particles’ circularity may be easier to determine than their sphericity, a “near-perfect sphericity” is the origin of all structure in the Universe, Julian Barbour argues. Clusters of particles or matter have formed circular patches. Taming infinity means taming the flow of time and all the things within, one shape at a time.

Something could be round even if it were the only in the universe, unaccompanied by anything from itself. David Hockney, The Arrival of Spring in Woldgate, East Yorkshire in 2011 (twenty eleven)

The emotion of time arises through the organized manifestation of the life of feelings. It may be possible to tame infinity if we consider spacetime as a relational space. Events are necessarily relational on an abstract entity like a quantum field or a dynamical hyperspace like the observable Universe. All the way through, shape appears to be a fundamental property of all objects. Nothingness is what precedes the creation measure. Julian Barbour labels it as the most important number in the Universe. It defines the “proportion of the total kinetic energy that is in change of shape and therefore changing — indeed, increasing — the amount of structure in the universe.” Numbers are said to show two faces. One is algebraic; the other is topological.  If a near-perfect sphericity describes the topologically related space initially,  the creation measure is its algebraically related image.

A relational perspective is highlighted in Lee Smolin’s causal theory of views. He proposes that the Universe is constituted of views of events which comprise information about energy and momentum transferred to an event from its causal past. In a particle formulation, he writes, the view of an event is the set of incoming energy-momentum vectors which coincide or interact at the event. His theory takes me back to Whitehead and the existence of feeling-like phenomena within an intrinsically experiential Universe in which every bit of experience holds its particular point of view. Events involving the interactions of particles with their nearest neighbors have created the view held by Julian Barbour of a shape sphere. From a shape sphere to the sphericity of Earth and Sun, is the Universe, too, a sphere rubbing against others that inches its way through a multiverse? But then the Universe, we’re told, is flat. How things snap into place and to what extent they interlock is a matter of perspective. We can only observe outcomes, whether they are spherical, ellipsoidal, or any other n-shaped objects. 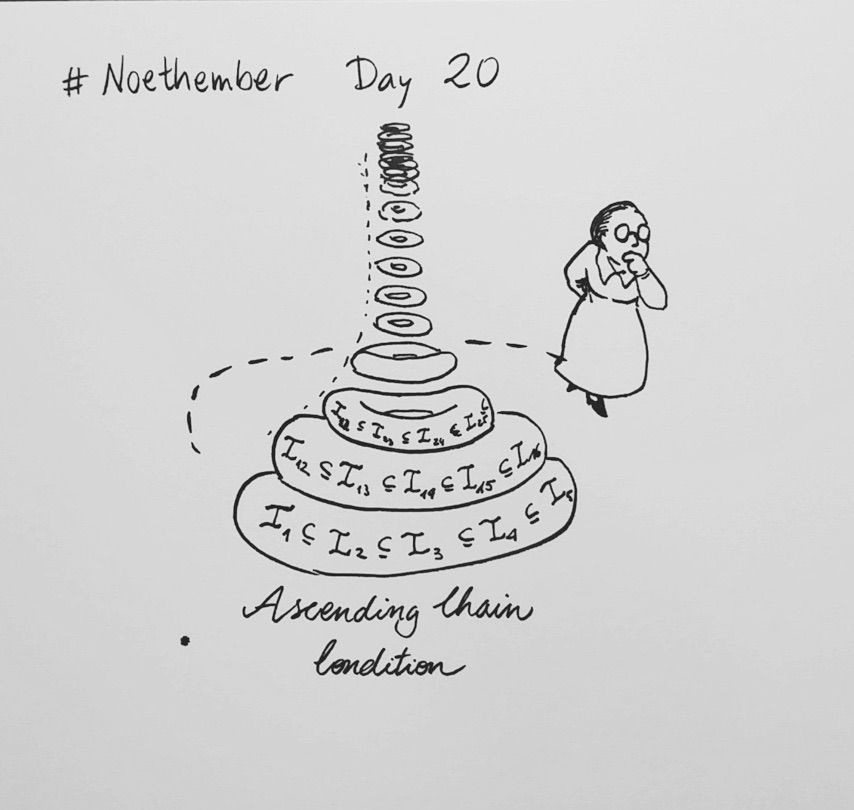 Van der Waerden is quoted to have said that Emmy Noether “only worked with concepts”*, noting the principle of detachment that characterizes her work. Her life contribution marks a shift from particular mathematical objects to more general conceptual connections. She explained in her 1918 paper on Invariant Variational Problems that by a ‘group of transformation’ is meant a system of transformations such that for each transformation, there exists an inverse contained in the system, and such that the composition of any two transformations of the system, in turn, belongs to the system. In other terms, every invariance or symmetry property of the laws of nature or a proposed theory there corresponds a conservation law and vice versa. It means, I gather, the relative invariance of properties, the existence of a codependency between the shape of objects and the space they cover even when shapes become distorted. Scale invariance points to an absence of scale, a dimensionless aspect of the Universe. Christof Wetterich proposes that a fundamental quantum field theory does not involve any intrinsic parameter with dimension, mass, or length. This is the meaning of fundamental scale invariance. But then, when I hear the word invariance, somehow it rhymes with the word convergence…

The efforts of most human beings are consumed in the struggle for their daily bread but most of those who are, either through fortune or some special gift, relieved of this struggle are largely absorbed in further improving their worldly lot. Beneath the effort directed toward the accumulation of worldly goods lies all too frequently the illusion that this is the most substantial and desirable end to be achieved; but there is, fortunately, a minority composed of those who recognize early in their lives that the most beautiful and satisfying experiences open to humankind are not derived from the outside, but are bound up with the development of the individual’s own feeling, thinking and acting. Genuine artists, investigators, and thinkers have always been persons of this kind. However inconspicuously the life of these individuals runs its course, nonetheless, the fruits of their endeavors are the most valuable contributions which one generation can make to its successors.

How that which is variational fits with that which is invariant emphasizes events over objects. If, at the onset, an impulse out of nothingness has set off the outbound of bits of energy, we still wonder not just what nothingness is but whether objects arise prior to any relational structure. Philip Morison, for his part, writes that the chief indiscernability is the fact that the Universe is modular, with its smallest denominator being a particle or quantum. Objects have dispositional properties within the confines of their internal degrees of freedom and within the bounds of their external degrees of freedom. It may be why shape dynamics takes a relational approach towards objects. Like with the orbit of the Moon, the revolution of the Earth, the clumping of molecular clouds, the expansion of the Universe, a spatial and temporal relationism has been initiated and sustained from the start. It may be of a spherical nature.

Indications from quantum gravity suggest that there is a more fundamental level of description in which there is causal structure but no space. Instead, space emerges as a low energy description of nature, and with it emerges locality

Lee Smolin, The dynamics of difference

In a maze of abstractions, is time something added to space or space, something added to time? Beyond transformation and differentiation, what is left of the identity of things? Invariance, more commonly known as constancy, is the will of the timeless flow. It defines spacetime uniformity, homogeneity, and isotropy. Invariance belongs to the category of events. It stresses that there subsists an enduring relationship. It is reminiscent of the concept of doing nothing, remaining inactive, a principle of willful detachment, in Taoist philosophy, from any outcome. “The Tao always remains inactive, yet it acts upon everything in the world.” If the Universe is ultimately and simply conceptual in nature, can nothingness be treated as a standalone property that allows objects to connect? Science might give to this last bastion which has yet to be conquered the name of dark energy. In essence, nothingness is the state of relations without relata.