Who is crying in the distance?
Why is it so sad?
Ride a golden horse and see
That it's the past

Who is crying in the distance?
Why is it so sad?
Ride a gray horse and see
That it's the future

Who is crying in the distance?
Why is it so sad?
Ride a white horse and see
That it's Love

Who is crying in the distance?
Why is it so sad?
Ride a black horse and see
That it's Death

Song in Abyss by Ya Hsien, translated by John Balcom

The initial motivations for a theory, writes Chris Smeenk, are sometimes rendered dubious or superfluous by later work. In my own journey that began with a wish to define a relationship between Consciousness and the Universe, I agree that the above statement might be true given all the relevant issues that need to be considered in that relationship. Will my initial purpose be swamped by unforeseen ideas, washed away down the road by what I will end up expressing, clueless now of what it will be?   I would say no, but in the network of highways that cross through my mind, I am not conscious of what I will write till I have written it, and what it entails comes as a revelation even to me. For now, this is how I learn the ropes as I am jotting notes into my notepad.

In the past few decades, cosmology has become a precise science. Since History inconspicuously displaces itself in time and space, today’s explorers and cartographers are discovering stars and galaxies of a Whole New World separated by voids like lands are by seas. The Sloan Digital Sky Survey (SDSS)  has created the most detailed three-dimensional maps of the Universe ever made. SDSS began with data collection from Apache Point Observatory in New Mexico and added that from the Las Campanas Observatory in Chile three years ago. Over the past 20 years, it has gone through various phases of operation.

Galaxy redshift surveys, including SDSS I and II, BOSS, and eBOSS, measure three-dimensional positions of millions of galaxies in redshift space. In its 4th phase, SDSS has provided spectra for around 2.6 million unique galaxies covering over 11 billion years of cosmic time. In 2012, it started to include data of the spectra from the Baryon Oscillation Spectroscopic Survey (BOSS) which mapped the Universe on the largest scales. Its successor eBOSS focused on a cosmological survey of quasars and galaxies. In so doing, it has created the largest spectroscopic sample to date with 173 736 star-forming emission-line galaxies, half a million luminous red galaxies, and 330 000 quasars. Although quasi-stellar objects -- commonly known as quasars -- appear to shine like stars, they are not. They are phenomena powered by the accretion disks of active galactic nuclei. Due to their high intrinsic luminosity, they can be used as tracers of the large scale structure at high redshifts. I mentioned previously that we find ourselves in the center of an imaginary celestial Sphere, and our body seems to elongate itself, stretching its arms to reach beyond. I think that the distance revolution touches upon one of the most significant themes that I pursue, that is the idea of universalization. We are not anymore reaching by land and sea one continent after the other. We are set to conquer the Universe not physically but with our minds. When we talk about distance revolution, what it means is that by the mere fact that we are able to pinpoint the location of astronomical objects on a celestial map, our Universe becomes a more familiar face and appears closer to us. And those markers -- newly identified objects -- become themselves landmarks on our journey,  ports on a portolan chart that show us the way to future discoveries. 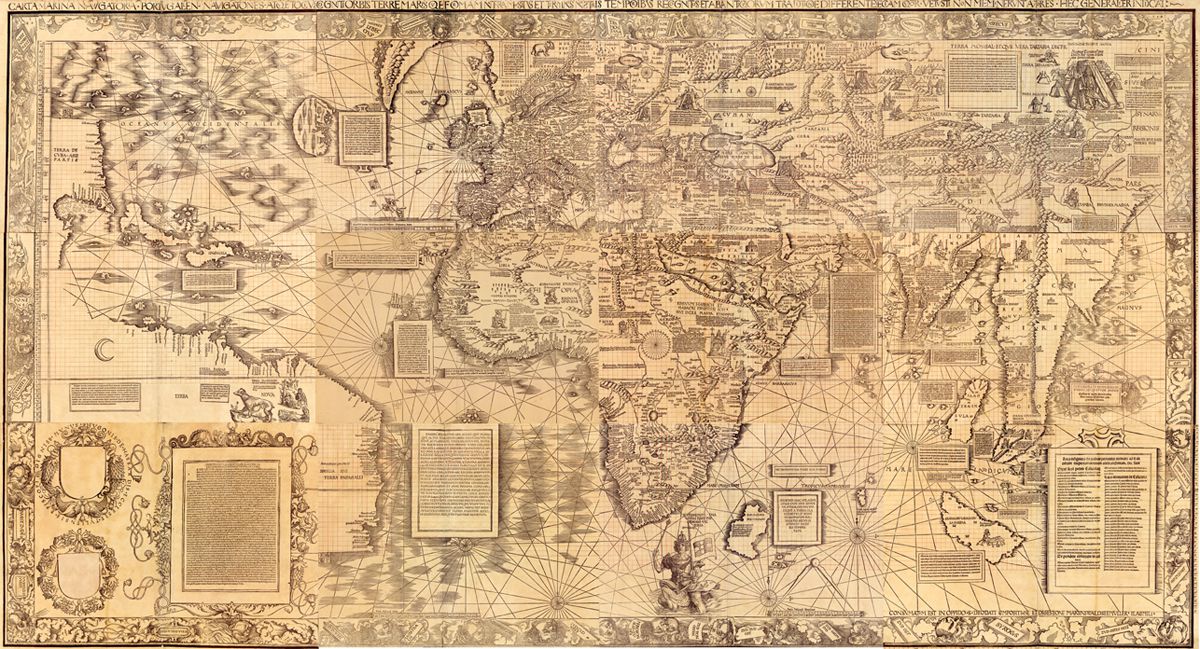 As I once wrote, poets imagine connections between almost everything.  I see the expansion of the celestial Sphere happening the way tectonic plates move apart, except that galaxies are not like crust anchored to a ‘solid’ space but floating on an invisible mantle. Their movement is not due to convection but to an invisible gravitational force. Shadowy points in the night sky like uncharted lands on the horizon are brought out of the darkness to tell a totally different story from what we expect.

Cosmologists look for clues to interpret celestial signs. Ingenuity allows them to find all sorts of ways to explain the unexplained. They look at the emission and absorption lines of galaxies,  measure baryon acoustic oscillations, and use to their advantage galaxy-scale strong gravitational lensing. The observation of the emission and absorption lines of galaxies gives an indication of their evolution phase, Clusters of galaxies are located at the intersection of filaments (and sheets) which radiate radio synchrotron emission, powered by the infall shocks of baryons. SDSS has been instrumental in the way we are increasingly using those  ‘frozen relics’ that are the baryon acoustic oscillations (BAO).

BAO leave their imprint on the distribution of matter in the Universe as a characteristic separation scale between matter over-densities. This distance is found in the separation of gravitationally collapsed structures such as galaxies and quasars and can be used as a `standard ruler' by large-scale surveys to measure the evolution of the expansion of the Universe at different epochs.

The Completed SDSS-IV extended Baryon Oscillation Spectroscopic Survey: BAO and RSD measurements from the anisotropic power spectrum of the Quasar sample between redshift 0.8 and 2.2

The eBOSS team’s measurement of the current rate of expansion of the Universe has confirmed that it is about 10 percent lower than the value found from distances to nearby galaxies. The study of the cosmic web and in particular the collection, analysis, and interpretation of the statistics pertaining to galaxy clustering, have fostered the publication of a great number of scientific papers. Large Scale Structure catalogs have become the basis for testing cosmological models. One research paper released a Spectroscopic Identification of Lensing Objects candidates. Another reported on the Halo Occupation Distribution model of Emission Line Galaxies. As part of the eBOSS program, the  Lyman-alpha forest is a probe that measured early structure in an equatorial region of the celestial Sphere -- the Stripe 82 field. Using those results, a paper presented a 3D map of large-scale matter fluctuations. The distribution of matter provided by the probe consists of absorptions in the electromagnetic spectrum of bright and distant sources such as quasars.

The distance revolution is about how much more we can stretch ourselves to grasp, through a telescope’s lens or a radio receiver, the four corners of the Universe.  Our brain is a screening room where images and stories are projected onto the walls of our minds. Those images and stories in the form of 3D maps allow us to understand the workings of the Universe better than we would, have we only had at our disposal abstract thinking and mathematics.

Distance revolution also means taking down walls, popping each other’s bubble to remove the distance that separates us. Our extended mind rises to a new level, transcending what we understand by 'being human’.