What one sentence of advice can encapsulate the embrace of breadth and the journey of experimentation that is necessary if you want...to arrive at a place optimized for you alone?

A new subject brings along an array of metaphorical expressions like coronal holes, helmet streamers, and coronal rain. When the hot plasma high in the Sun's corona undergoes rapid cooling, the coronal rain condenses and falls to the surface in post-flare loops. Helmet streamers are composed of yet smaller substreamers channeling continual density fluctuations at all visible scales. A typical coronal mass ejection (CME) is characterized by its shape, halo, and signature.

CME consists of three components; an eruptive prominence associated with a bright core, a lower density dark cavity region, and a diffuse leading-edge CME front with its legs connected to the Sun.

Human nature is wired to recognize common patterns, but what role does intuition play? Intuition is wrapped in a bundle of fear and reason. How can we tell the difference? Instead of ignoring sparks of intuition and hints inside our head, can our silent intuition become louder with enough practice and training? What I’m talking about here is the suggestive dialogue spurred by our senses, arising from sensory stimuli, like the glimpse of a book on a desk, the last words written on a previous post, or the sight of wavering leaves on a tree whose foliage is otherwise immobile, put in motion by busy birds on a branch, a dove nesting or a downy woodpecker pecking. It requires us to notice and understand that the principle scientists and philosophers abide by is intuitive, the same one poets, for their part, are willing to embrace without a second thought.

Heights give us the deceptive impression that we are closer to the sky. In the eighties,  I used to ride my bike before dawn to see the Sun rising from the top of Charbon Hill in Beijing. Years later, in New Zealand, during that summer of 2013, I once felt uneasy by the closeness of the clouds while wandering in a late afternoon on the hill path at the Wellington Botanic Garden, where no sun peeked through the heavy sky. My impression was not wholly off since Austral Borealis can be seen from New Zealand. They are open trails to the Sun on the doorstep of the cosmic cave. The common thread between those memories is the Sun, ruler of our calendar, with the Moon, the stars, and the asterisms, and the subject of this inquiry. A brilliant and vivid Aurora Borealis illuminates the Earth’s northern hemisphere on Jan 20, 2016, providing a spectacular view for members of Expedition 46 aboard the International Space Station

To address questions related to the physical mechanisms and structure involved in the electromagnetic fields, NASA's Parker Solar Probe mission recently plunged through the inner heliosphere of the Sun to its perihelia, about 24 million kilometers from the Sun. The science journal Nature provides news and views on the findings of the Parker Solar Probe. Four academic papers were published this month on the matter. While the high wind streams may be coming from deep within coronal holes, evidence shows that low-latitude coronal holes are a key source of the slow solar wind. An increasing rotational component to the flow velocity of the solar wind around the Sun was found to peak at 35 to 50 kilometers per second. The journal revealed how peculiar it is that the solar magnetic field exhibits patches of large, intermittent reversals. The latest results of a decades-long search for a dust-free zone surrounding the Sun were also highlighted.

When there is an onset of solar activity, it reaches its apotheosis and may unleash one of the strongest geomagnetic storms since 1755. In a ripple effect, a solar flare creates an outflow of particles traveling through interplanetary space to the Earth's poles. The Northern and Southern Lights are a manifestation of geomagnetic storms like the one that occurred on the 26th of August 2018. The Norwegian scientist Kristian Birkeland (1867–1917) laid the foundations of our current understanding of the nature of the aurora borealis.

I don't know what is more intriguing, to wonder where those solar flares are coming from and their subsequent impact on Earth or to study the long-term patterns in solar cycles. We are currently in the 24th cycle since 2008 until the onset of the next one in around 2019-2021. The Sun cycle is believed to be linked to the number of sunspots. The Maunder minimum notably refers to a time in history around 1645 to 1715 when the number of sunspots was at a prolonged minimum.

Sunspots are dark regions on the solar surface where the presence of strongly and densely twisted magnetic fields inhibits the plasma and energy flow into the regions, resulting in cooler and darker regions compared to the surrounding regions on the Sun’s photosphere.

The number of sunspots climbs, at solar maximum, up to 200 in very active or strong solar cycles and drops down, at solar minimum, to 20 or less sunspots during periods of solar minimum. Some have speculated that we may be heading toward another Grand solar minimum if the decline in the photospheric fields continues beyond 2020.

Indeed, researchers have been working on predictions for future solar cycles, with cycle 25 to end around 2029-2031. Some claim that a gradual decrease in solar activity has been underway since the 22nd solar cycle that began in 1986 and predicted that the next cycle will be even weaker. The current solar cycle 24 was preceded by one of the deepest solar minima experienced in the past 100 years, causing cycle 24 to not only start about 1.3 years later than expected but also be the weakest since solar cycle 14 in the early 1900s.

Can we follow the solar winds all the way to the heliopause? And if there is a decrease, what are the implications on faraway planets such as Uranus and Neptune? Much like the Earth, other planetary magnetospheres would have also undergone changes in their magnetopause shape as a result of the observed global changes occurring in the solar wind, notwithstanding the fact that planets are different from each other. Uranus has negligible internal heat while Neptune's internal energy enables the unraveling of powerful winds and rapidly-evolving storms, as the observation of the new Great Dark Spot on Neptune has shown.

The observed decrease in solar activity has naturally initiated studies on the response of the terrestrial magnetosphere. Its steady expansion has been observed since 1996. However, a forecast of the magnetopause (MP) shape in 2020, the expected minimum of cycle 24, showed a smaller MP stand-off distance. On the other hand, a drift of the Earth's North Magnetic Pole may be associated with a decline in its magnetic field. 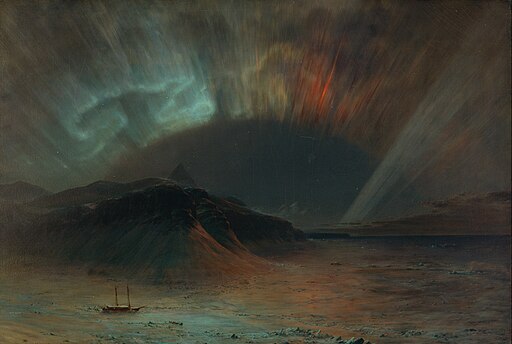 And the Aurora Borealis was out. I’ve seen it only a few times in my life. It hung and moved with majesty in folds like an infinite traveler upstage in an infinite theater. In colors of rose and lavender and purple, it moved and pulsed against the night, and the frost-sharpened stars shone through it. What a thing to see at a time when I needed it so badly!

John Steinbeck, Travels with Charley in Search of America, p.48

Chasing a snow rainbow on the way back from Montreal through the pine trees of the Adirondack mountains and the frozen ponds, bounded to the east and west by mountain peaks covered in snow, a wave of disappointment washed over me for not reaching the Canadian Rockies to see the Northern Lights and catch the sunrise above the clouds as I recall words I read years ago that Wisdom is like the Sun and knowledge, the Moon… but ...the floating clouds of mistaken thoughts veil (human) nature... (Le Sutra de la plate-forme, p.46, 1992).