I always thought graveyards
Were the most despicable things.

Per se:
The fallen trees do not claim the ground.
When their years are counted down.
Falling down does not weight their care.

The earth with gravity brings back down.
What once was one with it.
What joy Mother Earth must feel.

The trees only know birth and rebirth.
Not an hommage to the dead.
Too busy to bear the weight of time.
From the old ones the new ones climb.
What joy Mother Earth must feel.

Consider a fate.
Circular and sound.
The richness of one’s life turned back around.
It is my only want, to grow from the ground.

Sometimes it isn’t about reason. Sometimes it is about sharing each other’s personal experiences and carefully listening and assessing what is being said. William James wrote that no account of the Universe in its totality can be final if it discards other forms of consciousness entirely different from the so-called rational consciousness. “How to regard them is the question, for they are so discontinuous with ordinary consciousness”. One may wonder where consciousness lies. Adding to our pairs of feet, nostrils, ears, and eyes, is our brain too made of half-fields? Does the right hemifield feel closer to heaven when the body turns its head up gazing at clouds?  Words have planted seeds in my head. The individual consciousness appears multidimensional, structured into a self, a being, a living soul, and a person, as might have said Edward Conze. It divides itself into the perceptual mind, the receptual mind, the conceptual mind, and the intuitional mind, the latter being that of the living soul whose ethereal body swings on a string hung from the Moon. Imagination is a Monastery and I am its Monk I have found inspiration in myths and folktales. According to a legend , so "many moons ago" Native American tribes lived underground in total darkness ...

Some posts serve as mile markers on a roadmap of the infinite game between the Universe and Consciousness. Others stand like an inn on the side of the road where one rests body and soul. The suggestive dialogue arising from senses are lifelines thrown to the mind lost at sea, wading in the water in the hope that it reaches the other shore. A spark of intuition has come out of the blue. Hints turn loud, then silent inside one’s head. There is, Lois Isenman writes, a subliminal physical sense of the experience of intuition as a rapid closing and opening somewhere in the chest that accompanies the mental experience of seeing a generic signal go down and then up on a graph. “Intuition occurs when a number of different strands of information coalesce below awareness into a novel and significant piece of understanding”. Such a form of consciousness, the elements of which instead of being concepts are intuitions, Maurice Burke writes in 1901, is called cosmic Consciousness. At the root of all altered states of consciousness, of all flow states is an intuition.

My intuition, I must quickly add, deserves the credit to the extent that some of these ideas were initially before their time. Likewise, my confidence in them, in addition to their holding up thus far, rests on my intuition having taken the lead in my investigation, and in an unusual way.

I was privileged enough to have Thomas updated me on the continuation of his spiritual experience. What I see in his experiential approach to consciousness is the manifestation of a strengthened and sustained intuition. Intuition shows a direction of a journey whose ultimate destination we do not yet know. It is an exploratory probe going here and there. I recall what Barbour writes about positions and momenta and momentum, I feel, is the intuition. It defines the direction of the object and may trigger “whole classes of phenomena that have not yet come to light” as Lois Isenman writes. Intuition is born at the quantum level.

A higher state of consciousness is achieved when the conscious mind meets the unconscious. Outwardly, yoga and meditation act as soothing agents on muscles and nerves. Inwardly, Thomas bears witness of his own experience and reports a shift — which others have talked about —  from the ego-bound mode of ordinary consciousness toward a right experiential mode prevalent in altered states. He may be the witness of the path taken by his own consciousness to the far-reaching boundaries of unconscious cognition. In the tuck-of-war between consciousness and thought, that he previously reported on, yoga and meditation bring unity to body and mind and allow the leveling and synchronizing of a conscious wave that washes over them. Transitional thoughts - Consciousness and the Universe

As time passes, an increasing number of praying mantises are spotted in the native plant garden. A friend of mine said the other day that it is a sign of a healthy ecosystem. " Whenever I want to ...

The voice of consciousness to which Thomas refers appears to uproot egotistical thoughts and be broadcast louder and louder in his head. According to the Global Neuronal Workspace Theory, there is a central ‘workspace’, primarily residing in frontal regions of the brain. I asked Thomas whether he could use the word ‘resonance’ in the context of the right/left brain as I can’t quite figure out the direction of the arrow: is it an intrusion of the right hemispheric content into waking awareness or is it from the frontal regions of the brain that an exploratory probe is sent — through yoga, meditation or trance — into the right side of the brain? It may also be that the “reporting of when a conscious thought occurred” is being silenced or delayed, making it difficult to pinpoint its whereabouts. In the end, we may be talking about the inability of consciousness to report as it lies unconscious below the radar.

The central question of whether each hemisphere supports an independent conscious agent capable of making its own decisions was raised in a 2020 study. Could the resonance felt in the right hemifield not be identified and spoken of by the left hemifield? The study echoes Thomas’s own questioning about the right half being occupied by consciousness and the left half by thought of which ego has taken possession. Although I sense a difference between trance on the one hand and yoga and meditation on the other, the “trance self” mode appears also to operate within the right-posterior experiential/sensorimotor network domain. A trance may be a higher-order emotional state characterized by an alteration of time and space, an increased relation with what is unconscious and intangible, an access to alternate ways of experiencing internal and external reality, and a dissociative state that the rest of us may otherwise experience only in dreams. How does it feel like to be a bee on a leaf? Will I know if I enter trance? 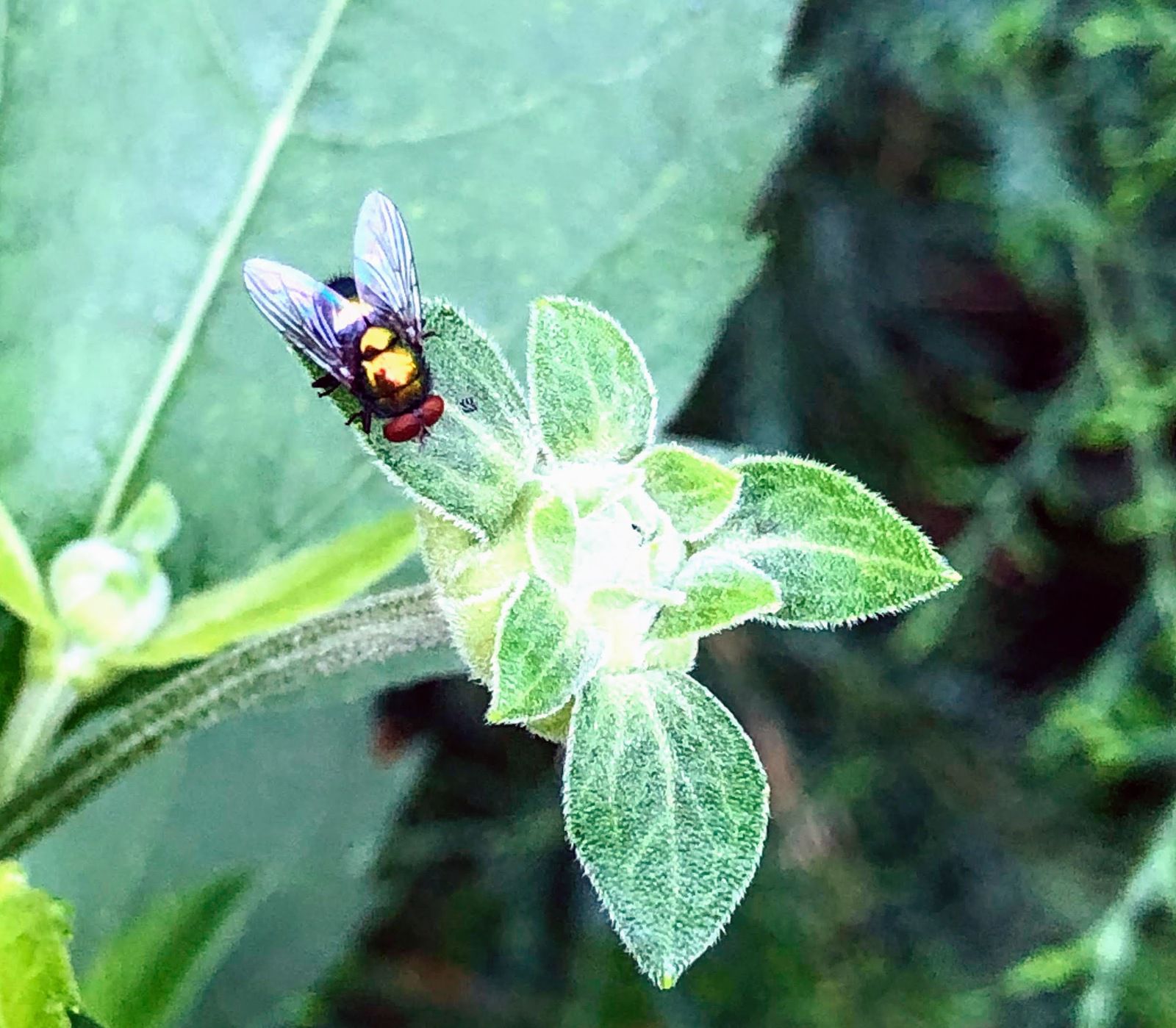 Conscious awareness represents a fluid equilibrium between anterior/posterior and right/left modes of experience that constantly shift depending on the individual psychobiology, external information input, and cultural paradigms.

While consciousness is the product of the two hemispheres, many unconscious processes run independently, and in parallel across both of them. Even if there is a separation of our subconscious and conscious minds, they appear to both exist simultaneously and interactively in the brain. Thomas describes streams of information split into two halves that yoga and meditation strive to unify. Taken into account the brain laterality and how the two sides of the brain tend to process information differently, the right hemisphere where intuition is largely grounded draws from a collective source.

Thomas’ experiential approach towards consciousness is the result of 50 years of yoga practice. He has observed that the right half of the head and face stays composed even when the left half is reactive or agitated because consciousness is detached whereas thought is attached to ego. His experience is reminiscent of the first neurophysiological study of an experimental subject Corine Sombrun whose shamanic state of consciousness has shown to involve a shift from the normally dominant left analytical to the right experiential mode of self-experience as well as from the normally dominant anterior prefrontal to the posterior somatosensory mode. It may be that reality is perceived at different levels depending on the individual being and the extent to which we strive to improve our perception skills. Perhaps these are not discontinuous forms of consciousness but a continuum between more or less conscious brain activities. Unity of consciousness may be the ultimate goal that one is inspired to achieve through any means. Beyond the clouds hampering our inner sight, unity of consciousness exists within the whole Universe.

There is a multitude of beings, I feel, coexisting inside our heads. We have the potential to sort them out and be more authentically in sync with our higher self. Lost at sea paddling to reach the other shore, some may succeed better than others at letting go of their earthly feathers. W.R. Klemm, Making a Scientific Case for Conscious Agency and Free Will In 1981, Herbert Benson, a cardiologist at Harvard Medical School, set out to study the ancient meditation practices of Buddhist monks on the Tibetan Plateau. With the Dalai Lama's blessing, Benson